On the 2nd leg of my journey through Leunig’s prayer, I have a few confessions to make. That’s because this might be the most challenging line of the prayer for me and it uncovers some uncomfortable truths about myself.
Whereas the 1st part of Leunig’s prayer was a petition to live slowly, the 2nd is to move simply.

God, help us to live slowly
To move simply
To look softly
To allow emptiness
And to let the heart create for us.
AMEN 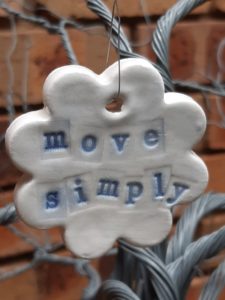 Move simply. What image comes to your mind as you read those two words? My own associations with simplicity have probably been shaped by movies and books. You know the ones. Stories set in the country, far from the madding crowd. There’s golden light and picking of home-grown veggies and swims in ice-cold streams. There’s lying on blankets at night gazing up at unpolluted skies of stars, before curling up with a book by a crackling fire of hand-chopped wood. Away from consumerism, content with the beauty and bounty of nature. Ah…the simple life!

But as much as I’d like to escape into that hermit-style ‘simplicity’, this prayer is calling me to move simply here. In my daily life. Where I am right now. In noisy, crowded, polluted Jo’burg where the light is more flickering-neon than golden. How do I move simply here?

Simplicity touches on many areas of our lives—our possessions and schedules and longings—which brings me to my first confession:

In seeking a simple life, I haven’t begun the radical Kondo-style de-clutter of cupboards or filed away the growing pile of papers dating back to the beginning of 2019. Ultimately I hope this prayer for simplicity leads me to owning less and being more organised, but it’s going to take time. Maybe these two words ‘move simply’ are a reminder that I can be gentle with myself even in this process, that I don’t have to do this in a frenzied, driven way but rather step-by-slow-but-steady-step. Maybe just beginning to head in the right direction is progress enough for now.

Having to deal with my complicated admin and clutter is, I suspect, only the outward manifestation of my lack of simplicity. The root is deeper, which leads me to my 2nd confession:

Confession #2: I’m a tad controlling and have perfectionistic tendencies

As I’ve been trying to live into this prayer I’m slowly relinquishing the need to have everything done perfectly and in a particular way. Perfectionism and control are surely the enemies of the simple life. Simplicity acknowledges that we can enjoy moments that aren’t precisely the way we had hoped or planned. In fact, simplicity realises how little control we have. It lives with open hands, not grasping at that which is outside our control but instead releasing these things to God with a child-like faith.

In allowing this prayer to change the way I think, it’s also impacting the way I interact with people. My third and final confession:

Confession #3: I have approval-seeking tendencies

Jesus said ‘let your yes be yes and your no be no’ and the wisdom of these words have struck me anew in my search for simplicity. I spend far too much time managing what others think about me and trying to make myself look good in their eyes. Simplicity, on the other hand, is genuine and sincere. It doesn’t play games or manipulate or puff up or put on masks or seek to garner admiration. Rather, it presents itself with calm, quiet confidence and honesty. I love this uncomplicated, truthful way of being in relationship with people.

I’m sure there’s more—much more—to simplify in my life. But for now that’s where the prayer has taken me and I’m simply moving where it leads. I’m interested to know where ‘move simply’ may take you as you live into this short but radical prayer.

May God richly bless your own journey into the slow, simple life it invokes.

(Prayer and cartoon from The Prayer Tree, by Michael Leunig, Harper Collins Publishers)