Do you want to get well? 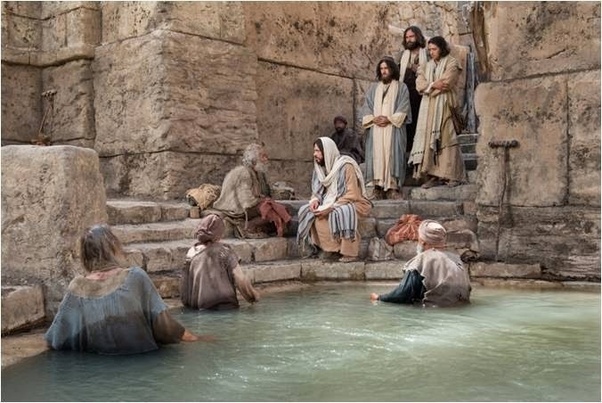 I lean against the pillar and stare gloomily out over the waters of Bethesda. Even in the shade of the portico, the midday heat accosts me. The press of people here—muttering or groaning or beseeching the angel to come—irks me more than usual. I have lain by these pools longer than all of them. Too many years to recall, in fact. I have patiently waited my turn to reach the stirred waters first, never doubting the power of the pool. Others have come and gone, some healed, some disillusioned. But I’ve always clung to the hope that my turn for healing would come.

It should have been today, but I was robbed! Fresh anger clenches inside me.

Simeon’s brother had taken him to his home a few days earlier and I had claimed Simeon’s spot for myself. It was perfect—near a pillar, yet a mere three steps from the water. I would be able to drag myself down them and into the pool before anybody else even realised the angel was stirring the waters.

Every day since Simeon left, I watched the pool, but the waters were mirror-still. Then today, in the graininess of first light, long before the sun’s rays come slanting over the eastern portico, I noticed the small ripples on the surface of the water. A thrill surged through me. Finally, my time had come! Quietly, so as not to alert the others, I began to drag myself forward. Down the first step, then the second. Only one step to go and I’d be a paving stone away from the edge. It was then that I looked up and saw the young man watching me from the far end of the central portico. He was the one who occasionally brought his mother here. The woman was not even truly paralysed, but the way she complained about her aching back and joints you might believe her to be worse off than me. A while ago I had silenced her whining with a sharp, ‘at least you can feel pain!’ Since then she had sat as far away from me as she could.

When her son’s gaze met my own this morning, I saw him glance at the water and shake his sleeping mother. He whispered something before picking her up and stepping between the bodies of the slumbering people. He was going to get to the water before me! At the cruel realisation, I shouted, “No!”

My voice carried loudly through the silent morning, echoing around the pool. People jolted awake. A few voices called out. A stirring! The angel has come! And then they began to shove their way to the water. I was almost trampled on by the man who reached it first—Isaac, the one with the shriveled hands. Moments later, he emerged wet and bedraggled from the water, beaming and claiming loudly that his hands tingled and his healing had begun. I didn’t even give his cursed hands a glance as I slowly dragged myself back up the steps to my pillar.

Anger still churns in me now as I think of it. It’s just not fair! Nobody’s suffering is as great as mine. I have been here the longest and yet nobody ever reaches out to help me to the waters. Nobody ever thinks of me!

I become aware of a group of men heading towards me—a rabbi and his followers, by the looks of things. The rabbi walks slowly, sometimes reaching down and touching someone, or smiling and saying a few words. The men with him appear more taciturn. Perhaps there are a few coins to be had from this lot, although they look rather threadbare themselves. Still, I cup my hands together in the beggar’s pose and let my mouth curl down into its well-worn plea of pity.

Even though they are a few paces away, I sense the rabbi has seen me. At the intensity of his gaze, a strange mix of anticipation and dread flows through me. His eyes linger on my face as he takes the last few steps towards me. I can’t seem to look away from him. Despite his youth, there is something wise and knowing in his eyes.

I suddenly realise that I have completely forgotten to ask for alms. “Please sir, just a few coins for an invalid. Thirty-eight years I’ve been like this, sir. Just some coins for bread.”

He doesn’t reach for a money-bag. Instead he asks, “Do you want to get well?”

The words are strange. For a moment I ponder what he could possibly mean. Of course I want to walk again but how is it even possible? Will this rabbi stay here and lift me into the angel-churned water? I doubt it!

“Sir, I have no one to help me into the pool when the water is stirred. While I am trying to get in, someone else goes down ahead of me.”

Only after I’ve spoken do I wish I had said it differently—that I hadn’t revealed so much of my heart to this man with the knowing eyes.

Yet, I sense compassion as he reaches out his hand. I grasp hold of it, hoping there might be a coin hidden in it. But at the touch, something strange flows through me. Acceptance. Hope. Strength.

The simple words are a command, full of authority and power. All I can do is obey.

Still gripping his hand, I pull myself up until I’m standing, swaying on my feet. A part of me knows this shouldn’t be possible, but another part knows just as surely that, through this man’s words, it is.

As if from a great distance I hear gasps and the clamour of voices, but I’m caught up once more in the man’s gaze. His eyes are lit with a child-like delight that warms something long grown cold inside me.

When he doesn’t answer, I look from him to the dark, still water. All this time I’d thought my healing lay there.

“Pick up your mat and walk,” he says softly, before turning away.

I’m suddenly aware that people are calling my name, tugging at me, asking me questions. What happened? Who is that man? Was there another angel stirring? Some faces around me shine with wonder, but others glare at me. I know what they’re feeling because I’ve felt it so often before. Jealousy.

Suddenly I want to be away from here—this walled in place that has been my prison for far too long, and these broken, needy people who have never truly been my friends. I roll up my mat and pick my way through the prone bodies, until I’m standing on the street leading to the Sheep Gate. It feels strangely like stepping into a long-gone life that has continued without me. The sights, sounds and smells are familiar. Hints of spices. Wafts of spring blossoms. Murmuring voices. But I don’t feel like I belong here anymore. A few young men walk past me. Their easy laughter fills me with a pang of longing. I follow them, trying to recall if there was ever a time I shared such close companionship. They appear to be heading for the temple.

We are almost there when I hear an angry voice behind me. “You!”

I turn to see an older group of men swooping down on me. Their stately beards and fine dark robes overlaid with tassled prayer shawls, identify them as Pharisees. The one with the deepest scowl says, “It’s the Sabbath; the law forbids you to carry your mat.”

Confused, I look down at the mat under my arm, wondering where I should have left it. “The man who made me well said to me, pick up your mat and walk.”

They mutter amongst themselves at this, until the spokesman asks, “Who is this fellow who told you to pick it up and walk?”

I stare around at the  people who have stopped to look at me and I feel the heat rise to my face. I hope to see the young rabbi so I can say that’s him! Then they will all leave me alone. But all I see is a circle of curious or accusing faces.

The Pharisees exchange knowing looks and I have the passing sense that perhaps they do know who my healer was.

“Tell us if you find him.” They brush past me without giving me another glance.

I mull around the rest of the afternoon, hoping to shake my sense of disorientation, or perhaps merely see a familiar face in the crowd. I slink away when I near a Pharisee or someone who might point out that I shouldn’t be carrying my mat. Every now and then I look down at my feet and marvel that I am standing and walking. Yet, I begin to wonder how I will feed myself now. Surely nobody will give alms to a man who can walk?

And then I see him! The young rabbi who healed me. He is seated on a temple step, talking animatedly to a large group of people seated around him. I want to rush over and sit at his feet to hear what he has to say, but I’m  afraid that he or his followers will tell me I have no right to be there, so instead I turn and slip back into the crowd.

A short while later I feel a hand on my shoulder. I find myself looking into the eyes of the young rabbi. He found me! The thought fills me with a peculiar thrill of joy.

His soft words remind me of the strange question. Do you want to get well? Perhaps when this rabbi speaks of being well, he means more than just my legs. Perhaps he sees beyond my broken body to my cracked heart.

“Stop sinning or something worse may happen to you,” the rabbi says, and—even as I bristle at the words—I know that he has indeed seen the jealousy, the anger, the bitterness that have shrouded my soul all these long years. Then he turns and walks away.

“Who is that young rabbi?” I ask the old man walking past me,

“Ah, it’s the one of the miracles.” The man smiles. “Jesus of Nazareth.”

So instead of hiding from the Pharisees, I go looking for one of them to tell them just who my Sabbath-breaking healer was.

This story is based on John 5:1-15
It is the first of a new collection of short stories called “Questions: Jesus asked of my heart”