The Surprising Theme that Wove its way into my Trilogy 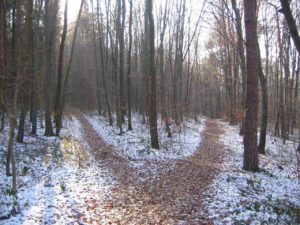 Almost ten years in the making and I’m on the final stretch of editing the last book of The Poison Tree Path Chronicles. The first book, Chains of Gwyndorr, is already out on the ether as an ebook, with the paperback hitting the book shelves in October.

The long, winding road to publication has been one of the most daunting voyages I’ve ever made. I had to face my own weaknesses along the way—pride, impatience and a selfish hunger for success. I had to learn to “Let go and Let God”, something I would have called a mere cliché ten years ago.

And it all began with a desire to tell a rather simple story about a girl called Shara and her journey of discovery.

But if the last ten years have taught me anything it’s that our journeys and our stories are never simple. They take us to places we can’t quite foresee—often deep, uncomfortable places. And so it was with Shara’s story. On her journey she and I met a cast of characters, many of whom just popped onto the pages—often surprising us both—the way a stranger might waft through a door, hold out his hand and say, ‘Hi, I’m Tom.’

These characters were unique individuals and their actions impacted on my ‘simple story’. It became more layered, richer and deeper. One of the most surprising aspects for me as the story’s creator, was that themes began to emerge. I hadn’t set out to explore specific themes, but they silently wove themselves through the lives of my characters until, one day, taking a step back I saw them there.

Not too long ago, the marketing department of my publishing house asked me to write a ‘Take-away’ line for Chains of Gwyndorr, for use by the sales people pitching the book to retailers. That was one of those ‘stepping back’ moments as I thought ‘what is this story about at its deepest level?’

After much deliberation this is what I gave them:

Captivity or Freedom – every choice we make is a crossroad.

Throughout the story, my characters face choices. Who to trust.  How to fight oppression. What to believe in. How hardships will shape them. Whether to face fear or run from it. These choices determine their journeys and their ultimate destinations. At times I wanted to shout a warning, the way I might for my children: “Are you sure that’s a good idea?” But I couldn’t interfere – their lives unfolded based on the choices they made.

Ultimately I hope that my characters’ lives are both a warning and an inspiration to my readers. A warning that what we do has an impact, not only on us but also on those around us. And an inspiration that we can overcome the things that ensnare us. That we can choose to walk a path of freedom.

Over the course of the next four blogs I will be introducing you to Shara and three other characters who had the audacity to ‘pop’ into her story. I’ll tell you just a tiny bit of the journey that each of these characters find themselves on (just enough to make you want to know what happens to them, but not enough to be a spoiler!)

And now it’s your turn: If you had to write a Take-away (theme) line for your life, what would it be?