My lamp’s flame casts moving shadows on the familiar path leading to the olive grove. The sounds of Jerusalem’s Passover festivities fade as we descend into the valley. Only the occasional bark of a dog still reaches us. It is colder down in the valley and I pull my woollen cloak closer to my body, suppressing a shiver. Behind me, even Thomas and Matthew’s murmuring voices eventually die down. By the time we enter Gethsemane’s grove, we do so in complete silence.

Our usually peaceful sanctuary feels different tonight. The twisted branches we walk under are like a giant’s hovering hand, the moon peering out behind them, like an accusing face. I try to shake off my sense of unease, but the whole evening has been swathed in such solemnity. As if darkness draws closer and presses down on us.

The rabbi stops at the place where we always gather. I expect him to take his usual spot, but instead he remains standing.

“Sit here while I go over there and pray.”

There’s a strange note in his voice that I’ve never heard before.

It’s been a long, emotional night and the others gratefully slump to the ground. Only James, John and I remain standing, uncertainty written on our faces. Jesus nods at us and we fall in behind him as he moves deeper into the garden. After a while the rabbi halts and drops his head into his hands, taking a long, shuddering breath.

I step closer and place my hand on his shoulder. “Rabbi?”

As he turns to look at me, the tear-tracks on his face glisten in the light from my lamp. James and John have moved closer too, as distressed as I am by the anguish we see on our rabbi’s face.

“My soul is overwhelmed with sorrow to the point of death.” The rabbi’s voice breaks on the last word. “Stay here and keep watch with me.”

In the moonlight we watch him wind his way to one of the oldest trees in the garden. He kneels down and then bends forward, his body rocking slightly as if caught in a tempest.

I meet John’s gaze and it reflects the same sense of helplessness that I feel.

Abba. The tender name Jesus calls the Lord carries to us. I’ve heard him speak it often—with faith-filled assurance—but tonight it has the ring of a lost child desperately searching for his father.

The breeze brings his next words too. “If it is possible, may this cup be taken from me.” Then, softer, so that I have to strain to hear the words. “Yet, not as I will but as you will.”

I slide to the ground, my eyes still on Jesus, pondering these words. I’ve heard him speak before of the cup only he can drink. I suddenly remember the sorrow in his eyes as he passed me the cup at the Passover meal. This is my blood, poured out for many. My tired mind struggles to understand if these cups are one and the same.

Keep watch with me. I know what the rabbi is asking of me. I should be praying for him now, praying for us all. But the heaviness of this night has worn me down. I curl onto the ground, cradling my head on my arm, and pull the robe over me in a vain attempt to ward off the chill in my bones. The chill in my heart. 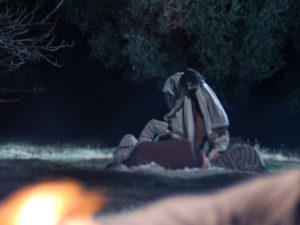 I awake. Momentarily, terror tears through my body and catches in my throat. But it’s only Jesus bending over me. John and James stir awake next to me. I glance at the moon, trying to ascertain how much time has passed since we slept.

“Could you men not keep watch with me for one hour?” There is more pain than blame in the rabbi’s voice.

Shame washes over me. Alone. The rabbi was so very alone. Hadn’t I declared my undying devotion to him mere hours ago? Yet, I couldn’t even stay awake when he needed me the most.

“Watch and pray so that you will not fall into temptation. The spirit is willing but the body is weak.” His gaze is earnest, as if imparting something of great import.

“Yes, Rabbi.” I sit up, trying to shake the sleep away, and watch him return to his place of prayer.

Again he kneels and the words carry to me. “Abba, if it is not possible for this cup to be taken away unless I drink it, may your will be done.”

My eyes grow heavy and my head drops, jerking me awake. No! I must watch and pray. But already I hear James’ soft snores, and when I glance at John his eyes are closed. Is he praying or sleeping? I whisper a prayer into the night. Lord, help us tonight. Keep us safe… My thoughts keep drifting, drifting, drifting.

Now I’m on a boat, drifting alone on the Sea of Galilee. The sail flaps wildly in the icy wind and ominous clouds build on the horizon. I fumble with the ropes so that I can head for land, but they are knotted and my hands are so cold. So very cold…

I’m pulled from the restless dream by the sound of footsteps. The rabbi has returned. Before I can speak, he turns away, moonlight silvering his hair and highlighting the bend of his usually straight shoulders. Like a man carrying the weight of the world I think, before drifting back to sleep.

At the disturbing sight, I force myself awake, glancing over to where the rabbi kneels in prayer. A man in white kneels with him. His arm is around Jesus’s shoulder, his head bent against Jesus’s head. I look over at James and John still asleep beside me. The man is not one of us. Could he be…? No. I dream still.

I rub my eyes and when I look back at Jesus, the dream-figure is gone. The rabbi rises to his feet and as he walks back to us, I fumble into a sitting position and fold my hands in my lap, in a pretence of prayer.

Yet, of course he knows the truth. I see it in his eyes even before he asks, “Are you still sleeping and resting? Look.”

I follow the rabbi’s gaze to the entrance of the garden and see movement there. Fear courses through my body. For the first time this night, I am fully awake. There are men in our garden, and by the number of flaming torches, they are more than just a few! What frightens me the most is how silently and stealthily they have approached. These men do not come in peace.

The rabbi’s next words confirm my worst suspicions. “The hour is near, and the Son of Man is betrayed into the hands of sinners.”

James, John and I are scrambling to our feet even before Jesus says, “Rise, let us go!”

Yes! We can escape. I know a path that leads out the other side of the garden, onto the Mount of Olives.

“This way Rabbi!” I grab at the rabbi’s robe, for instead of moving away from the approaching company, he is moving towards them.

Now that they are closer, I see faces amongst the torches. Some I recognise as temple guards. Others, armed with swords, are Roman soldiers. But only one face comes into sharp focus, for it is the face of a friend. A man we have broken bread with, debated teachings with, lived with, laughed with. For three years we have been fellow followers of the rabbi, as close as brothers.

Jesus is looking at him too. “Here comes my betrayer.”

A kiss? The sign of respect and love a follower bestows on his rabbi? What does this mean? Does Judas come in peace? But no. Didn’t Jesus just call him a betrayer? 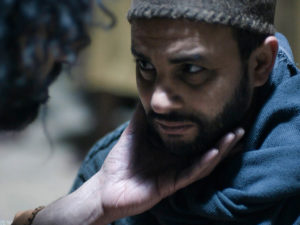 “Friend, do what you came for.”

Friend. At the endearing term and the gentleness with which Jesus says it, a shadow of regret chases over Judas’s face. For just a moment I think he is going to speak or laugh, perhaps to say, ‘you misunderstand. These men only wish to hear you teach.’

But instead he lowers his gaze and steps aside.

And the horde of armed men engulfs Jesus, the way darkness snuffs out light.

Continue your journey through Easter by reading these stories:

The Kiss, the Strike and the Touch (Story of Malchus)
Denial Before Dawn (Story of Peter)
Murderer in the Crowd (Story of Barabbas)
Voice in the Garden (Story of Mary Magdalene)

Subscribe and receive Legends of the Loreteller, the Companion Book to The Poison Tree Path Chronicles.