Who do you say I am?

Who do you say I am?

In the shadow of Mount Hermon lies a forbidden city. Caesarea Philippi. Every rabbi warns of it. Every father tells his sons its sordid history. Every upstanding Jew avoids it as he would a leper colony.

But Jesus has taken us right into the heart of it.

As we walk up the road leading to the Temple of Zeus, I see two Greek men dragging along a goat on a short rope. They are heading for a platform built against the mountain to the right of the temple. I avert my eyes. I’ve heard tell what despicable things men do in worship of Pan, their goat-man god. I do not wish to see it.

Jesus stops at the base of the temple steps. A well-dressed Roman casts us a quizzical glance as he passes us to ascend the steps. His expression tells me what I know all too well—a Jewish rabbi and his devout followers should not be lingering at a pagan shrine such as this. I watch him reach the top of the steps and pass between two of the temple’s marble pillars. He disappears from sight into the dark interior. They say this temple is built on a cave, the so-called ‘gate to the underworld’. A strange cold wraps around me at the thought that the temple hides Hades itself.

Jesus has turned his gaze from the temple to us. “Who do people say the Son of Man is?” he asks softly.

It takes me a moment to shift my thoughts from these pagans, who don’t know him at all, to the Jews, who all have their own opinions about him.

James answers before I can. “Some say John the Baptist. Others say Elijah.”

“And still others, Jeremiah or one of the prophets,” Philip adds.

Yes, I’ve heard all these views in conversation. The people know the rabbi is different. They know he is powerful. They’ve seen his miracles. Yet all they have to compare him to is the great prophets of the past, or the great Baptiser, whose strident words still ring in their ears despite his recent death at the hands of Herod Antipas. But I know their estimation of Jesus falls far short of the truth.

“But what about you?” Jesus asks, his expression solemn, as though he fears that we too might believe such talk. “Who do you say I am?”

“You are the Messiah,” I say, with a rush of certainty. “The Son of the living God.”

Jesus regards me intently and then nods, almost imperceptibly. As always, warmth suffuses my chest at his approval.

“Blessed are you, Simon son of Jonah, for this was not revealed to you by flesh and blood, but by my Father in heaven. And I tell you that you are Peter, and on this rock I will build my church.”

Peter, the rock. On the first day we met, he had given me this new name. Impulsive, hot-headed me—a rock? As pleased as I am that Jesus calls me this, I don’t always feel strong or steady as a rock.

I follow his gaze back to the pagan temple that is the gate to the underworld, and a shaft of understanding pierces me. His church will be more powerful than any false god or any false teaching. His truth will smash through the very forces of evil that linger in this place. And this same incomparable strength will make even me—impetuous Simon—into the pillar he calls Peter.

As I turn back to him and meet his gaze, he smiles at my insight.

I stand a while longer staring at the temple-lined hill, thinking about keys and gates. I try to imagine what the gate to heaven’s kingdom will look like—surely very different to the underworld’s gate that these pagans seek out?

After a while I realise I am alone, and look around to see my companions walking back in the direction from which we came. I lift the folds of my robe around my legs and hurry after them.

Andrew is at the back, and as I fall in beside him my brother gives me a long, searching look.

“You know what you said back there?” he says. “About Jesus being the Messiah?”

“The rabbi just said that we are not to tell it to a single person.”

“But wouldn’t it be good for people to know? Isn’t it better than thinking he is Elijah or the Baptiser come back in the flesh?”

Andrew shrugs. “Think about it, Simon. They’d want to crown him, like King David. Maybe even force him to start a revolution against the Romans.” 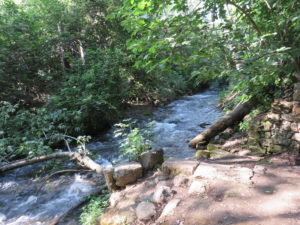 We fall silent as we follow the course of the Jordan, away from Caesarea Philippi. But my mind churns like the white waters of the river. Would it be such a bad thing if Jesus could throw off our Roman oppressors? There’s no doubt in my mind that he could do it.

When the afternoon sun is low on the horizon, Jesus finally calls us to a halt. We spread our cloaks on the ground around the flat rock on which the rabbi has seated himself, expecting him to start teaching us again. I hope he will speak more about gates and keys, and exactly how we will gain access to this kingdom of heaven he speaks so much about.

For a while he gazes into the distance, in the direction of Jerusalem, and I sense he is about to tell us something significant.

Eventually he looks at us and his words, when they finally come, are slow and sombre. “The Son of Man must suffer many things and be rejected by the elders, the chief priests and the teachers of the law. And he must be killed and on the third day be raised to life.”

Killed? The word jars through me like a punch to my stomach. Jesus killed? Impossible! He is the Son of God—who has the power to kill him?

I see the shock on everyone’s faces. This foolishness must stop now.

“A word, Rabbi?” I grasp Jesus by the arm and he allows me draw him away from the others. When I judge that we are out of earshot, I release his arm and declare, “Never, Lord! This shall never happen to you!”

He turns to me, fiercely. “Get behind me, Satan. You are a stumbling block to me.”

I recoil at his harsh words and the anger I see in his eyes. Earlier, I had basked in his approval, had even felt a measure of pride in his chosen name for me—Peter the rock. But now I burn with shame. I am not a rock, only a stumbling block. I glance over to see if the others heard his words of reproach. Each one of them is looking our way.

Jesus now takes me by the arm. Softly, so that only I can hear, he says, “You do not have in mind the things of God, but the things of men.”

“Whoever wants to be my disciple must deny themselves and take up their cross and follow me. For whoever wants to save their life will lose it, but whoever loses their life for me will find it.” I can’t help but look up at his mention of a cross, one of Rome’s cruel execution devices. Still he speaks of death—his and ours—as if it is inevitable.

He glances at Judas as he says, “What good will it be for someone to gain the whole world, yet forfeit their soul? Or what can anyone give in exchange for their soul?”

I’m still pondering these questions when he snags my own gaze and smiles. “For the Son of Man is going to come in his Father’s glory with his angels, and then he will reward each person according to what they have done. Truly I tell you, some who are here will not taste death before they see the Son of Man coming in his kingdom.”

At his smile and the lightness of his last words, joy finally courses through me. As the river next to us washes away the flotsam of the pagan city, I finally feel my shame and the strange heaviness of this day wash away at Jesus’ words.

Glory and angels! Now that’s what a Messiah should be talking about. Much better than all his talk of crosses and death.

It is one of a collection of stories based on the questions Jesus asked.

Other stories in the collection:

Have you believed because you have seen?

Which of these three was a neighbour?

Why do you call me good?

Do you truly love me?

Do you want to get well?

Where are the other nine?

Why are you so afraid?

Can you drink the cup I am going to drink?

Why do you call me ‘Lord, Lord’ and do not do what I say?

Subscribe and receive Legends of the Loreteller, the Companion Book to The Poison Tree Path Chronicles.